Who Invented Carry on luggage? 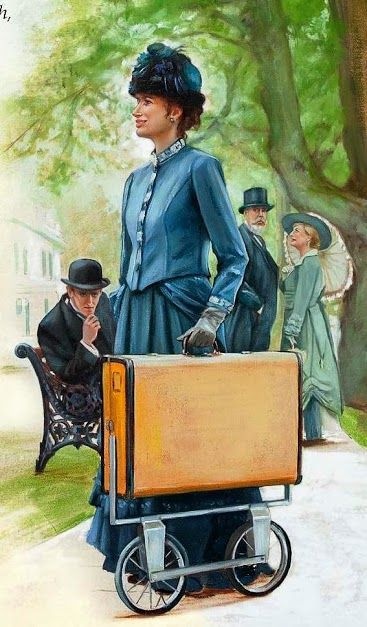 The Answer May Suprise you... At the turn of the 20th Century, Bible Students were bringing Bible Literature to the masses. Carrying this fine message about God's Kingdom by person, horse and buggy, bicycles, motor bikes, and the horseless carriage known today as a vehicle.

Brother Russell and associates had an urgent message about the coming of God's Kingdom which was to be marked at the end of the Gentile times. The result? A series of books called the Millennial Dawn. This six-volume, clothbound set was so well put together that an Opposer of God's Kingdom publicly complained that the clothbound set was being offered for the modest cost of the printing of $1.65...

Some Bible Students did not even mention the printing costs and paid the costs themselves so that the public may receive freely. "You received free, give free." However, how could an iindividual carry this six-volume series to the place of distrubtion without going back to the buggy? Many began using luggage, but those things got very heavy and it was a taunting task.

Brother James Cole invented a foldable, two-wheeled frame to which a suitcase could be attached by screws. The six volume series contained some fifty books and were heavy to carry, especially for sisters. When full-time preacher Charlotte White arrived in Louisville, Kentucky, U.S.A., rolling a suitcase on wheels, she caused quite a stir. This New Invention was called the Dawn-Mobile.

Visit JW.org Get Accurate Answers to Your Questions. Bible is in over 120 (tongues) and over 1,070 languages of Bible Literature.