The Final Phase of Christ's Presence soon to be revealed... 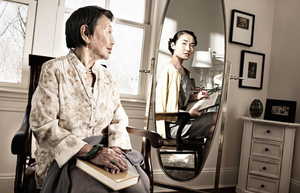 When studying prophecy I have encountered a common denominator. The revealing of prophecy comes with a process. I have not yet come across a single prophecy that has occurred in an immediate fashion. Most make the claim that (Matthew 24:30) can only occur after the Great Tribulation, but let us reason among the surrounding scriptures. "Immediately after the tribulation of those days, the sun will be darkened, and the moon will not give its light, and the stars will fall from heaven, and the powers of the heavens will be shaken.  Then the sign of the Son of man will appear in heaven, and all the tribes of the earth will beat themselves in grief, and they will see the Son of man coming on the clouds of heaven with power and great glory.  And he will send out his angels with a great trumpet sound, and they will gather his chosen ones together from the four winds, from one extremity of the heavens to their other extremity." (Matthew 24:29-31)

The following verse states, 'Then the sign of the Son of man will appear in heaven'. That sign began in 1914 causing all the tribes of the earth to beat themselves in grief, including those who are rightly disposed for everlasting life, even those whom are anointed are not immuned to Satan's woes upon the earth. "For just as the lightning comes out of the east and shines over to the west, so the Presence of the Son of man will be." (Matthew 24:27) What is that sign? The four horsemen that ride, all have work to do. These four horsemen are part of that Composite Sign spoken of in Jesus' answer to the question, “Tell us, when will these things be, and what will be the sign of your presence and of the conclusion of the system of things?” (Matthew 24:3) They give evidence of Christ's Presence as the Son of man coming on the clouds of heaven with power and great glory.

Christ 'will send out his angels with a great trumpet sound,' but what is the purpose? 'They will gather his chosen ones together from the four winds'. "The Lord himself will descend from heaven with a commanding call, with an archangel’s voice and with God’s trumpet, and those who are dead in union with Christ will rise first." (1 Thess 4:16) This prophecy was first spoken of at (Daniel 12:1-2) "Do not harm the earth or the sea or the trees, until after we have sealed the slaves of our God in their foreheads.” (Rev 7:3) "And I heard the number of those who were sealed, 144,000" (Rev 7:4)

Once the Last Days come to their end, the ones who are deceived by the Kings of Gog of Magog by refusing to give Jehovah and his Anointed One credit will begin dying a death of everlasting destruction, the second death with no hope of a resurrection. They die forever in the manner of Adam and Eve. However, as they die off without knowing of such, they begin to witness a wonderous phenomenon that positively provides undeniable proof of Christ's Presence as our Brothers and Sisters begin to receive the Blessings of Jehovah's Kingdom Government. (Daniel 2:44)

The Final Phase of Christ's Presence will Slowly Be Revealed as a Witness for All to SEE. The wicked will lament at seeing our Brothers and Sisters getting healthier as each day passes.